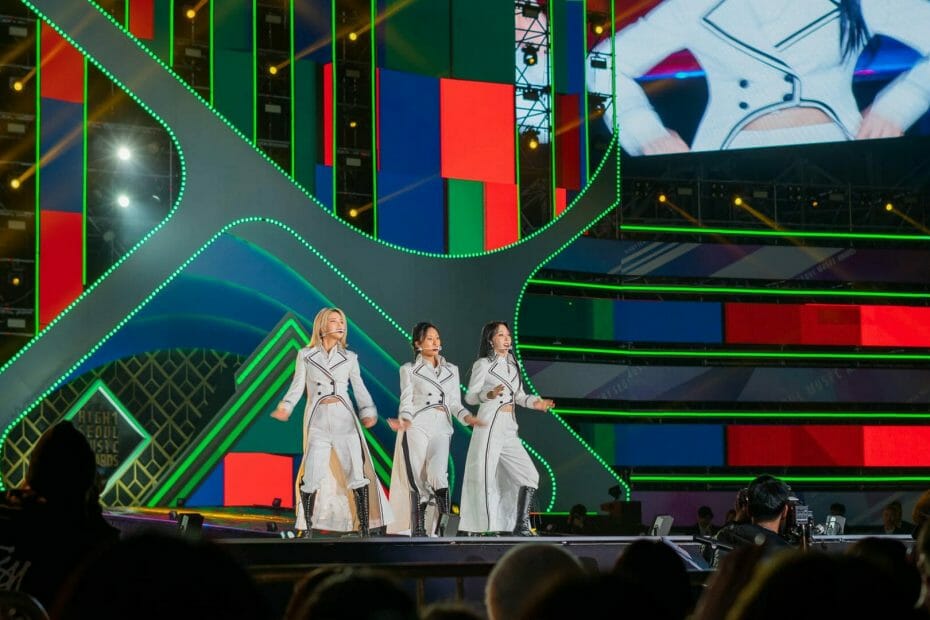 In not very long, Kpop has gone from one of the least known music genres globally to being a phenomenon that has taken the world by storm. Now, it’s hard not to hear about Kpop! Especially if you ever use the internet. The Seoul Music Awards are the epitome of Korean music!

When HaB Korea contacted me and asked if I would be willing to cover the event I jumped at the opportunity. Although I am not the biggest Kpop fan myself, I have been to performances by many groups before and they are always amazing.

I have never been to a concert before that is as involving and fun to watch as Kpop concerts. The combination of stage performances and singing makes the shows so much fun and it’s hard to turn your eyes away, even for a second.

This newfound fame began over a decade ago. However, now it’s mostly attributed to BTS – and fairly enough. 1/13 visitors to Korea said that BTS was part of their reason for visiting, and a massive amount of Korea’s GDP has been found to be due to BTS.

With that being said, what has caused this massive growth in popularity? I am not an expert by any means, but I think I can point out a few reasons. If you have never seen a Kpop performance, you are really missing out. There’s no other genre with quite the same stage presence.

On top of this, Kpop has a large personal aspect. Fans can watch shows that look into the lives of their favourite idols, they can find even find them with their own personal Youtube channels sometimes (such as Mamamoo’s Solar)! This personal touch adds a feeling of personal attachment, and many Kpop fans are some of the biggest fans you will ever meet.

With this newfound growth, there are Kpop shows all over the world now. From the USA to Malaysia, to Russia and New Zealand. Kpop performances which were once mainly limited to Korea can now be found all over the world.

However, despite this, the most prestigious festivals still remain in Korea. No festival is more important than the Seoul Music Awards – a show where the best-established groups, rookie groups, OSTs, and more are awarded based on their popularity.

From the SMA (Seoul Music Awards) we can find the best Korean album of the year, the best groups, the best singers, and more. It’s one of the few places where you can find a large variety of Kpop groups (and other Korean singers) in one show.

The awards ceremony takes place early in the year – this year, it was on January 30th. The next Seoul Music Awards will take place early in 2021 and will award groups awards based on their 2020 success.

The Seoul Music Awards this year took place at Gocheok Skydome, a big stadium located near Gimpo Airport. The festival runs for about 3 hours, beginning at 7 and running until a bit after 10 pm.

Many groups were present, with Super Junior, Mamamoo, Twice, Itzy, Red Velvet, Monsta X and more being in attendance. Although BTS and EXO won awards, they, unfortunately, were unable to attend. However, they had videos featuring the members reacting to them winning.

Despite being a very famous event, the venue wasn’t overly crowded which made the viewing experience very pleasant. On top of this, many of the floor seats are located very close to the stage and it’s easy to get a fantastic view! If you are looking for the best view, make sure to order from HaB Korea.

While an awards ceremony might sound boring, it was quite the opposite! Between the speakers, there were performances from all of the groups and singers in attendance. This meant that the time was pretty evenly split between speaking and performances.

All of the performers did amazing jobs and I was amazed (as I always am) by how synced and awe-catching the performances were. As I said earlier, I don’t think any other genre can compare with the stage presence that Kpop has.

What added to the performance, even more, was the stage. The stage and setting at Gocheok Skydome is by far the best that I have ever seen. I have watched many Kpop performances before, and have also seen many western performers. However, the effects of the Skydome are unparalleled.

From the more standard things, such as a big stage with screens as a backdrop and moving platforms, the stage also had fire sprinklers, smoke machines (that made awesome-looking smoke rings), and holograms which were projected on some kind of cloud-like substance. The production quality was of amazingly high quality and it showed that no cost had been spared on making the show a once in a lifetime event.

The only downside to the whole event was the extra security due to the recent Wuhan Coronavirus outbreak. However, this was a one-off and something that you should never have to experience any other year!

The culmination of everything else that I mentioned makes for a truly unique performance. No two SMA’s will be the same, and every year the lineup and performances will be totally different. While it’s really hard to explain in words, my favourite part of the show was the atmosphere.

The fans were screaming support for their favourite groups and idols, the stage and venue were fantastic, and the idols themselves seemed to be very happy to be there. It made for a very energetic atmosphere that can catch anyone, even non-Kpop fans.

For this reason, I think that the Seoul Music Awards are perhaps the one must-see Kpop performance. There are a lot of other fantastic shows and performances, but the SMA’s are very unique and something that you will remember for a long, long, time to come – I sure will!

Tickets are available for pickup from 2-4 pm, so it is required that you come a bit early. The first entry into the stadium is opened at 5 pm, and many people will begin lining up early. However, if you are on the floor, seats are already assigned and there is no need to line up early.

Once you are in, it takes a further two hours for the show to begin. The actual performances will begin at 6:50, and the awards will begin about 10 minutes after that.

The Music Awards finish at a bit past 10 o’clock. The awards this year ran until about 10:45 pm, however, they were scheduled to finish earlier than that.

This leaves enough time for most people to take the metro back to their house or accommodation. The only difficulties that you might have are if you came from far away, or from outside of Seoul.

Getting to the Gocheok Skydome is quite easy and can be done a few different ways. It is reachable from Guil and Gaebong stations – both of which can be found on Line 1 (the dark blue line). Guil Station is a bit closer, however, it may also be busier.

From Guil Station, the Skydome is a short walk of 5-10 minutes. From Gaebong, the walk is about 5 minutes longer. The stadium is quite easy to make out and you can’t miss it!

If you are planning to attend SMA, these are a few tips which might help make your evening a little bit more enjoyable.

2. Don’t worry if you forgot your posters and lights! There are a lot of vendors located just outside the Skydome and they sell a large variety of goods for all of the different groups. While they don’t sell everything, they do have a large selection and they are sure to have something for your favourite idol/group!

3. There is food available. There is food located both below the stadium, and nearby. The food in the stadium basement is a bit pricey due to the location, however, it is available. Food can also be found across the street from the stadium. If you are in a rush and forget to eat, don’t worry! You can find food.

4. Cameras are banned. But… You will see signs outside that say that cameras are totally banned inside. However, this couldn’t be further from the truth. I was located right at the front (just in front of the stage), and EVERYONE around me had DSLRs with massive lenses. The security guards were very aware of this – it’s impossible to miss, but they didn’t even bother trying to enforce the rules. I believe it is just a legal reason, so they have ground to fall back on if needed. If you want to take your camera, go for it. I did, as did everyone else.

Where to Purchase Tickets

The best place to purchase tickets is online at tour sites. I got my tickets from HaB Korea and they were fantastic – 4th-row seats in the centre. While the seating is based on a first come first served basis, they offer fantastic ticket options.

Purchasing the tickets online can also give you peace of mind. You know that everything is organised already and all you have to do is pick up your tickets. There’s no need to worry about rushing or panicking at the last minute.

Should You Visit the Seoul Music Awards?

Even if your favourite groups aren’t performing, the atmosphere and performances make it worth visiting for everyone. It’s an experience that you will remember for many years to come, and Kpop performances don’t get any better than the Seoul Music Awards.

If you are considering whether or not to attend the SMAs, then all I can say is that it is an amazing event and shows the best that Kpop has to offer. It is definitely a Korean must-do!

Where Do the Seoul Music Awards Take Place?

The Seoul Music Awards take place at Gocheok Sky Dome. This is a baseball stadium located near Guil Station in Seoul.

How Can I Buy Tickets for the Seoul Music Awards?

You can purchase tickets for the Seoul Music Awards at many vendors online. I recommend purchasing your tickets through HaB Korea.

The SMA’s take place on the 30th of January.

How Can I Get to Seoul Music Awards?

Getting to the Gocheok Skydome is quite easy and can be done a few different ways. It is reachable from Guil and Gaebong stations – both of which can be found on Line 1 (the dark blue line). Guil Station is a bit closer, however, it may also be busier. From Guil Station, the Skydome is a short walk of 5-10 minutes. From Gaebong, the walk is about 5 minutes longer. The stadium is quite easy to make out and you can’t miss it!

The line-up changes every year. However, you can always expect there to be some famous K-pop groups as well as a few solo singers and rookie groups.

What Is Seoul Music Awards?

Seoul Music Awards is an event that takes place every year to celebrate the most successful groups and albums of the year based on sales, fan votes and judge votes.